Technology has had a complete overhaul in the past few decades. Today, we get blasted with words such as 4K, 802.11 AC, HDR in almost every electronics store we walk into. Sure, they sound quite interesting and futuristic for the less tech savvy, but few people really know why they’re being wooed into purchasing devices with all these fancy specifications. What’s even more worrying is that you’d find the same people who grabbed 60″ 4K TVs during last year’s Cyber Monday complaining about the quality of video that their screens are giving when the issue might boil down to something like the type of router that powers their homes.

Selecting The Best Routers For Streaming

Whenever you head out to buy a new device, you’re mostly keen on the specifications of that particular device. We tend to do this without really considering other support devices that might be necessary to get the best out of the devices we are purchasing, and routers tend to fall in such categories quite often.

The Dynamics Of Streaming

A typical 4K video on Netflix with a runtime of 1 hour 30 minutes could end up consuming over 10GB of data. This amounts to 114MB per minute or 6.8GB per hour. However, if we assess this in terms of bandwidth, you’ll find out that you need an internet speed of at least 16Mbps to enjoy 4K content. Note that this is internet speed and not your router’s throughput speed. If you’re wondering, the throughput speed is the figure advertised on your router as its maximum theoretical speed. These range from 150Mbps up to 7.2Gbps.

Assuming that you bought a router with a maximum throughput speed of 150Mbps and intend to have up to 10 devices connected to the router, each device would be getting averagely 15Mbps as the maximum speed. At this point, you can already tell that if all 10 devices were to tune in to Netflix, some devices might automatically be switched to 1080p just because the router was incapable of delivering at least 16Mbps to every device. Comparing this to the 7.2Gbps router, you’ll find out that each user on the 7.2Gbps router can get a maximum of 720Mbps which is more than enough for watching 4K content.

However, you need to remember to distinguish between maximum throughput speed and what your Internet Service Provider (ISP) is offering you. If your ISP is delivering gigabit internet (1000Mbps), then each of your devices on the 7.2Gbps router will only get 100Mbps which is within the router’s limit of 720Mbps. The same cannot be said for the 150Mbps router as it can only deliver a maximum of 15Mbps, and this means you won’t be fully utilizing your gigabit internet because your router is the bottleneck.

So, How Do You Select the Right Router for Streaming?

Even though there are routers that have a throughput speed of 7.2Gbps, you’d be wise to go for something slightly lower depending on your needs. The main things you should consider before getting a good router for streaming thus include:

For standard homes, there can be up to 10-20 devices connected to the router. As such, a 150Mbps router will give each user approximately 15Mbps to 7.5Mbps which is not very ideal for streaming because you’d most likely miss out on 4K streaming. You would want to find a router that can give you at least 16Mbps to 20Mbps for each of your devices. If you work out the math backwards, you’d find that you should be looking for a router with a maximum throughput speed that ranges from 300Mbps to 400Mbps, but you wouldn’t be penalized for getting a router with a higher throughput speed like 1200Mbps.

The area that you need to cover also plays a vital role and it actually introduces new challenges into the picture. Routers can be categorized as either single-band or multi-band. Single-band routers only use the 2.4GHz band whereas dual-band routers use both the 2.4GHz and the 5GHz bands. Dual-band routers are capable of sustaining a high signal strength even in areas with a lot of obstructions, and this is why dual-band routers should be what you look for when your main purpose is streaming.

You shouldn’t forget your ISP’s speed as well because this will be the actual speed you’ll be getting across all your devices. If your ISP provides you with a 100Mbps connection which you intend to share with 10 devices, each device will get 10Mbps, and even a 7.2Gbps router will not help you here. Summing up all these factors, your ideal router for streaming should range in between $50 to $200 for best performance.

Now that we know what we’re looking for in a router, here are 5 routers that really stood out for us in terms of streaming capabilities. 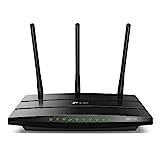 TP-Link’s AC1750 Smart Wi-Fi Router is your best bet when you want a balance between affordability and reliability. With a maximum throughput speed of 1750Mbps, this dual-band router can easily let you enjoy 4K content with up to 50 devices simultaneously connected to it. Even with this value of 50 devices, you still get a lot of room for expansion since 50 devices only take about 35Mbps each which makes the router great for 4K streaming.

It comes with 3 external antennas for long range coverage. Actually, TP-Link claims that the AC1750 can cover up to 2,500 Sq. feet with ease meaning that you can still enjoy strong Wi-Fi signals from the comfort of your backyard. Its reliability mostly comes in because of its CPU which handles most of the processing. As it retails at about $80, we really couldn’t blame it for not specifying just how powerful its CPU is.

Of course, there exist better routers under the AC1750’s series, the Archer C7, but only this model really struck the perfect balance between cost and performance. The 4 gigabit LAN ports it has also give you more flexibility especially if you need some devices to be connected to the router physically.

When compared with the TP-Link AC1750, Netgear’s R6700 Nighthawk would seem like a duplicate because they both have the same throughput speeds of 1750Mbps, but there is a good reason why the R6700 retails for $130.

For one, Netgear’s R6700 has a dual-core 1GHz processor that greatly boosts wireless and wired performance. This, coupled with the fact that it can beamform means that it is capable of prioritizing bandwidth for streaming videos. As such, not all the 10 users will be getting equal speeds if they don’t need high bandwidth. Its high-powered amplifiers equally play a role in how far the Wi-Fi signal can travel.

It is also worth mentioning that the R6700 could be great for mobile devices because NetGear’s airtime fairness and beamforming makes connections to mobile devices faster and smoother. Newly connected mobile devices won’t immediately get the highest bandwidth to prevent existing devices from suffering.

Software-wise, this NetGear router comes with a handy mobile app companion (NigthHawk app) that you can use to adjust the settings of your router with. Security, privacy, and parental controls could also be adjusted from the app. The R6700 also doubles as a great router for gaming because of its ability to prioritize bandwidth.

Unlike both the R6700 and the TP-Link AC1750, TRENDnet’s AC2600 comes with 4 external high-gain antennas which give it a small edge over the first two routers. The AC2600 MU-MIMO wireless gigabit router was mostly designed for busy homes. Think gaming, streaming and uploading all combined into one.

It generates two quad-stream AC2600 networks with the AC Wi-Fi taking up 1733Mbps while the 800Mbps being dedicated to Wi-Fi N networks. As you might have already guessed, TRENDnet’s AC2600 MU-MIMO includes gigabit ethernet ports (4 to be exact) along with a USB 3.0 port with which you can plug in your external hard drive and build a mini media server.

Its MU-MIMO performance shouldn’t be taken for granted too. MU-MIMO technology helps the router process different data streams simultaneously thereby increasing overall Wi-Fi performance which makes it ideal for handling video streaming. StreamBoost technology also comes in handy because it aids in latency prioritization, traffic shaping, and even traffic mapping which are all great in helping you eliminate stutter and prioritize bandwidth for individual devices. It also packs some interesting security features such as the ability to create an isolated guest network on top of the fact that its Wi-Fi network comes pre-encrypted out of the box.

Of all three routers reviewed so far, only the Linksys AC3200 WRT32X offers the highest throughput speed. While it is sold as a gaming router because of its high throughput speed, it can easily double as a router for streaming because of many factors.

For one, the WRT32X offers some impressive prioritization capabilities in that each of the devices connected to the router get their own individual dedicated data streams. As such, there is no competition for bandwidth and existing users can continue to enjoy streaming even when new users join the network.

The powerful 1.8GHz dual-core processor also keeps things in check when you are performing multiple tasks on the router. The data processing power the WRT32X gives you ensures that no single devices suffer because it promotes high-speed data processing simultaneously. Its user interface is also designed to make it easier to perform tasks such as controlling network traffic quick. For $130, the WRT32X would be more than sufficient for any streaming tasks. In fact, you could easily accommodate up to 5 heavy gamers in your network without noticing any challenges during streaming. 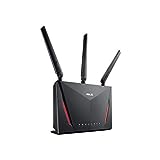 The RT-AC86U would be a great addition to your Republic of Gamers (RoG) collection simply because it is a beast of a router from Asus and at such an affordable price. However, it can also let literally everyone in your household stream 4K content depending on how much bandwidth your ISP is giving you.

ASUS’ AC2900 RT-AC86U is a dual-band router that can deliver lag-free all-day gaming and flawless 4K video streaming. Of course, its 1.8GHz dual-core processor had a hand in this as it helps optimize network traffic from both the USB 3.1 port and any of the 4 Gigabit ethernet ports it comes with.

If you’re using a compatible device, you could also take advantage of the router’s MU-MIMO technology so that your device gets its own dedicated Wi-Fi connection that won’t be slowed down when other devices connect. Since MU-MIMO allocates each device with its maximum speed, there won’t be any unnecessary interruptions while streaming. Instead, the router will work towards balancing which device gets the most bandwidth depending on either your manual settings or which device requires more connectivity. All this makes the RT-AC86U suitable for very large homes because it handles heavy internet traffic with a lot of ease.

You may have noticed that some of the best routers for streaming could also be great for gaming too. In fact, three out of the five routers reviewed are marketed as gaming routers. This is because there is an overlap between some of the factors that make a router ideal for gaming and streaming as well. Generally speaking, routers for streaming need to have high throughput speeds to comfortably serve everyone in a typical household. Of course, you could go for one with the highest speeds, but that would only be ideal if you intend to host a hundred people to binge watch the entire season 8 of Game of Thrones in 4K.

How To Setup A Netgear Wireless Router?

The Best Resolution For Gaming – The Lowdown

Gaming tips, mega-deals and more that we only share with our subscribers.

We use cookies to help our site work, to understand how it is used, and to tailor the adverts presented on our site. If you continue to use this site by clicking “Accept” below, you agree to us doing so. You can read more in our Privacy Policy. AcceptPrivacy Policy